Why You Should Always Compare Yourself to Others 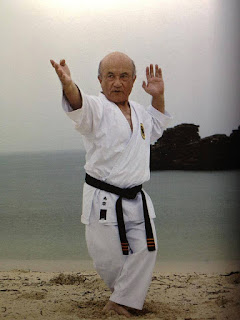 
It is a truism of the age that you should never compare yourself to others. That truism has been taken up eagerly by modern martial arts, often articulated as you should only measure yourself today against what you could do yesterday.

Both are wrong, at least when it comes to karate-dō.

At the immediate level of visible technique, a karateka should always be watching and assessing what others do. If the side kick of their sempai 先輩 (senior) is better than their own, they need to recognize that fact and try to understand which body mechanics make it better. If the outside block of their kōhai 後輩 (junior) is inferior to theirs, they need to comprehend what errors the kōhai is making, and whether their own technique may share similar flaws. Both are crucial teaching moments, because the essence of karate pedagogy is learning from others, regardless of their level.

It may be protested that these kinds of very specific comparison are not what the truism aims at. Instead, comparison becomes invidious when it is generalized and negatively affects how you feel about yourself. Wisdom means accepting yourself in the present. Leo Babauta writes, “We don’t need to be better than anyone else: we just need to love where we are and what we’re doing and who we are. That’s what matters.”

But karate is founded on the very opposite contention, because it is a combative discipline. In our dojo, we teach that the best fight is the one you avoid having, because very bad things can happen to you, regardless of your ability and experience. But if a fight is unavoidable, karate teaches you to win, for the simple reason that losing can have fatal consequences. The bottom line is that if you’re fighting for your life, you definitely need to be better than your opponent. If someone is trying to kill you, loving where and who you are is a rather unreliable strategy. A fight to the death is the supreme instance of comparing yourself to someone else.

Now, karate-dō aims at living, not killing. The great master of our style of karate, Shimabukuro Zenpō 島袋善保, has never been in a street fight, and we, his students, strive to follow his example. Nonetheless, the lessons of karate-dō for living flow from the principles of combat. The Japanese say, “Satsujinken; katsujinken” 殺人剣活人剣: “the sword that takes life is the sword that gives life.” What, then, can be learned from karate’s foundation of ultimate comparison?

The best lesson is to reject not only the truism of “never compare yourself,” but also its ethos. What is promoted as the much better alternative to comparison is acceptance, the heart of loving yourself where you are—you  don’t need to change.

But karate-dō says you do need to change. We go to the dojo, some of us six days a week, expressly to change what we are. That’s why we work and sweat so hard. The great value of a physical discipline like karate is that it never stops reminding you that you need to get better. Karate is very complex, demanding, and difficult, and no matter how long you train, you never reach the level of being good enough. Yet, for those of us who love karate, this is inspiring, not discouraging, because it teaches us a simple truth: learning itself is transformation. If you already know enough, there is no point in going to university; if you already have grasped the essence of art and grace, there is no point in reading a great book; if you already embody the best of what it means to be human, there is no point in going to a dojo. You only study, read, or train because you realize that self-improvement is a transformation. It not a possession you can own; it is something you become. Learning changes who you are, and great learning changes you in profound ways.

The other failure of the ethos of “don’t compare yourself with others” lies in presuming the virtue of loving yourself or making you feel good about yourself. Despite the penchant of Western martial arts clubs for marketing themselves by claiming they will improve your self-image, real karate-dō is completely unconcerned with such goals. The first example of watching someone’s side kick is exemplary: the point isn’t to build self-esteem; the point is to be utterly and ruthlessly realistic about what, where, and who you are. In combat, truth trumps narcissism. The point is to recognize both your strengths and weaknesses and keep building from there. In this view, “don’t compare yourself with others” is not self-development, but self-destructive: if you don’t have the courage and honesty to face your inadequacies, then you’re not going to have the courage to face someone in combat. To go back to the side kick: the better test of yourself is how you react if your junior’s kick is better than yours. The karate way is not to avoid comparisons, but to cultivate the character to face them. We work on the self instead of insulating it. That’s what we do when we compare ourselves to superb teachers like Shimabukuro Hanshi or my own sensei, Dan Smith. They are better than we are, in multiple and very tangible ways, so we train hard to try to become just a little more like them. We think that the best thing for ourselves is to compare ourselves with the best, in the certain knowledge we will fall short. It’s that comparison that keeps us trying.
Posted by Doug Aoki at 15:26