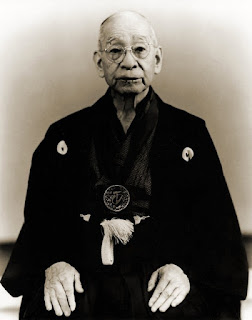 Karate gives you the means by which change takes place.

Karate is not about staying the same; it’s about changing yourself: sharpening your technique and getting faster, stronger, and more supple. It’s about becoming a better fighter. But it’s about more than that, for while the way of karate is through combat and the body, its traditional aim is much broader. The karateka seeks to become a better person inside as well as outside; s/he works to change who s/he is as a woman or a man. In the Japanese mind, the transformations of the outer and inner person are connected. The cultural precept is that some important aspects of the spirit can only be forged through consistent and disciplined physical practice.

It is the ascendance of change that configures the value of humility. Karate teachers often speak of humility, although nearly as often there is a serious disconnect between the humbleness they espouse and the noisy pride they have for themselves. Still, that disconnect is not the point here, because conceiving humility as modesty, while important, also misses something crucial. The karateka seeks to change her/himself because s/he recognizes that change is necessary. In that light, humility is better understood as the recognition that we need to change, that we are insufficient as we are right now. A religious analog is the Christian tenet that we are sinners and that it is only the through the grace of Christ that we can be redeemed. I am not a Christian, but I do believe in a parallel thesis for karate: we are fundamentally lacking, as martial artists and as human beings, and we change through the grace of our way in the dojo. This is why the word karatedō has “the way” (dō) at its heart.

The way of karate is difficult. Our society works directly against such humility. Pop culture activists and academics alike are sure they’re being progressive by urging us to accept and love ourselves, our bodies and our persons, just as they are. If someone thinks s/he is not good enough, s/he is seen as having a damaged psyche, one needing psychotherapy or pop-psychology affirmations. Karate, on the other hand, tells us than none of us is good enough. All of us need to be stronger, wiser, kinder, more open, more generous, more humane, and just plain better. To be human is to always have weaknesses we need to overcome: perfection remains out of reach for all our lives. That’s why we karateka keep training. Our punches aren’t good enough yet. Neither are our souls. The great sensei Chibana Chōsin 知花朝信was once asked what constitutes a positive attitude in karate. He responded, “Always thinking, ‘not yet’, ‘not yet’.”

Trying to face your fundamental or essential weaknesses is not easy. Yet that is precisely the work of the serious karateka. It is one of the discomfiting virtues of karate is that its practice repeatedly forces you to face your physical inadequacies. It’s hard to believe you’re a perfect fighter when you get punched in the face. It’s difficult to believe you don’t need to be much better when you perform your best kata and then watch someone else do it with so much more elegance and precision. It’s hard to deny that you have to get stronger when your muscles burn and legs shake. This is one reason why the name of our dojo is Nantanreiken: “the hall of difficult grace.” And if the Japanese precept is to be believed, these physical frailties reflect mental and spiritual parallels.

Even those who grudgingly acknowledge they could be better reject deep change. The late aikido sensei and Zen priest Furuya Kenshō 古屋健昭 built his dojo by hand. He hung a sign over its gate so he would see it each time he came in. It read Bansetsu-an 萬拙庵, which he translated as “the retreat of the untalented teacher.” I once told a sociologist that story. He said that it was bullshit. He said, “I’m a good teacher. What’s wrong with thinking I’m a good teacher and still looking to improve?” What’s wrong is the refusal to consider the possibility that he needed to do more than burnish his self-ascribed shining pedagogical credentials. What’s wrong is that he lacked the necessary humility.

And what’s wrong is how that sociologist proudly closed himself to the possibility of learning from a path different from his own. Most people like to think of themselves as open-minded. But I used to tell my sociology undergrads to never trust an open-minded person, because s/he was closed precisely to the specifics of her/his closed-mindedness. Real openness requires a willingness to risk radical change and not just some safe, minor improvements. In such change, you cannot know in advance what kind of person you will become. You may not even recognize yourself anymore. At minimum, you will likely realize that who you were before was blissfully unaware of how s/he needed to change, how her/his sense of the self and world was ultimately founded on happy ignorance. You might even realize that you were not such a good teacher after all.

Such change, with its disturbing potential, is close-coupled to learning itself. We are very finite creatures and there will always be a vast knowledge beyond what we already know. On the one hand, this should be exciting: regardless of our age or training or education, we can always learn something new, a little more of the wonder of the universe. On the other hand, opening your mind, body, and self can teach you to think in powerfully different ways, which means your understanding and consciousness can shift in dramatic and unexpected directions. Profound insights are profound because they can change you in deep, often irrevocable ways. Unless you confine your learning to a tiny portion of the human experience, unless you determinedly close yourself off from the rest of the world, you cannot keep yourself insusceptible to what you learn.

So a punch is never just a punch. Learning karatedō is opening yourself much, much more. Like any great way of learning and being, whether combative or artistic or scientific or something else, it is a means of becoming more human. It demands enough humility to be open to the change that entails. But it offers a very special and difficult grace.