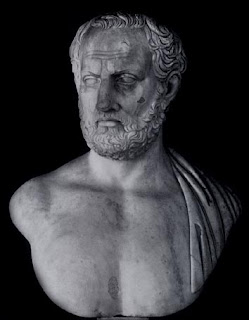 The Japanese word for practice is keiko 稽古. The great Shōtōkan sensei, Ohshima Tsutomu 大岛努 translates this as “to reflect on the old.” Karatedō is practiced with great reverence for masters of the past. The instructive contrast is the marketing penchant for the “new and improved.”

This appreciation of the old is not limited to the masters of karate, nor even Japan. Thucydides articulated the ideals of budō more than a thousand years before there was budō. He wrote,“the nation that makes a distinction between its thinking men and its fighting men will find its thinking done by cowards and its fighting done by fools.” Thucydides was such a great samurai. In budō, the civilized person must train seriously in both thinking and fighting. This is called bunbu ryōdō 文武両道: the united ways of the pen and the sword.

Of course, this is not the reality of this culture and these times. Academics pride themselves as professional thinkers, but if you find your life on the line in a street assault, you probably won’t desperately wish you had a professor by your side. And if you’re seeking insight into Camus, you probably won’t turn first to a UFC contender. But the issue is more serious and concrete than those imaginary scenarios. History continues to be written in the blood of innocents because violence is perpetuated by the brutally stupid, whether some idiot with a handgun or a president with poison gas. Still, that is hardly to news to any of us. What gets less examination, however, are the consequences of having thinking done by cowards.


The emphasis on personal freedom, one of the attributes of individuality strongly enunciated in a democratic society, inflates the ego to the extent that it makes demands without assuming responsibility.

This is a perfect description of both internet flaming and too many academic debates. The deep problem with the person who sees her/himself as a professional thinker is precisely that identification, because her/his sense of self is wrapped up in what s/he says as the incarnation of her/his professional thought. This is the terrible flaw of anyone who believes s/he is intelligent: the belief that what s/he says is worthy of attention, respect, and admiration because s/he is so damn smart. The tell-tale is the indignation and rage when faced with criticism. The professional thinking self cannot tolerate being wrong or, even worse, looking stupid.

Budō is different. A great teacher of the sword was in the middle of class when a challenger came blustering into the dōjō. Trying to provoke a fight, the interloper sneered,“You’re so stupid!” Without even looking at him, the sensei replied casually, “You’re right. I am the stupidest person I know,” and kept on teaching. This is not the response you can expect in an internet argument. Or the academy. For more than a quarter-century, I have assiduously searched for a professor like that sensei. I’m still looking.

Fighting and karatedō are not for cowards, because they force you to face your limitations. Your degrees, research awards, or overweening pride can’t help you to avoid them. And if you can’t say, honestly, that you’re stupid, you’re a coward. In that case, I suggest you stay far away from our dōjō, because there, we have real consequences for cowardice.
Posted by Doug Aoki at 10:16