The praise that no one else can hear 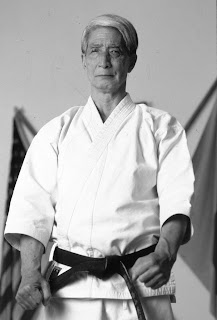 Randall Hassell is 8 dan in Shōtōkan 松濤会 karatedō and one of the most respected American writers on martial arts. He tells a story about the great Shōtōkan master, Nishiyama Hidetaka 西山英峻, visiting the dōjō where Hassell taught. Hassell was in awe of Nishiyama, but the latter surprised Hassell by treating him with great respect and consideration, as if he were a peer:


For the first two days he buttressed my confidence, talked intimately with me, and stroked my ego. By the second day, I was riding high on a wave of thick pride.

It was now the third and final day of his visit, and he announced that we would each perform our favorite kata under his attentive and critical eye. “You first, he said, pointing at me. “Everybody warm up.”

That’s when things began to go badly. Nishiyama rebuked Hassell even before he started his kata, telling him he showed no spirit as he stood waiting to begin. Hassell was embarrassed, as all his students were watching, but that feeling quickly changed into something else and worse as Nishiyama ordered him bow over and over again, criticizing each time and not even letting him execute the first move of the kata proper. Finally, he permitted Hassell to go on, and Hassell says, “I performed that movement as it had never been performed before—smooth, graceful, flowing, strong, full of feeling and intensity.”

Nishiyama just shook his head sadly. “No, no, no.” He adjusted Hassell’s head, his arms, his shoulders, his back, his legs, his knees, his feet and his toes. Then he kicked him in the rump and whacked his belly. “Start over!”

The kata usually takes under 60 seconds to perform. Forty five minutes later, Hassell was still starting over, but each time to Nishiyama’s dissatisfaction. Hassell was feeling faint. “Start over!” His vision was blurring. “Start over!” He was about to keel over. “Start over!” Finally: “Hai [yes]! Finished! Bow!” Hassell writes,

I saw the awed faces of my students staring at me, mouths agape. They will probably all quit, I thought, now that they have seen how lousy I really am.

Then Nishiyama patted me gently on the back, smiled, and very quietly, so no one else could hear, said, “Very good kata.”

The praise that no one else can hear is, of course, utterly useless to an academic career. No merit increments to be had there. One of the hard but core lessons of karatedō is that it is a life-long, often lonely and extremely demanding pursuit of such uselessness.
Posted by Doug Aoki at 08:24