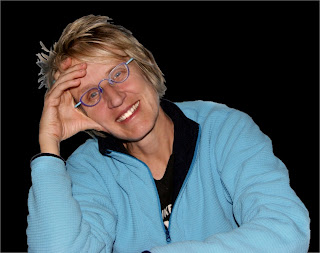 B K Loren
From B K Loren’s memoir, The Way of the River. After meeting her new karate instructor, Jack Blakely, and being impressed by his affability, insights into budō, and smiling Gerber baby face, Loren attended her first class:

When Jack finally called, “Line up,” and the students ran to their places, my heart was pounding with excitement. Then Jack started teaching, and I was certain I had made one of the worst judgments of character possible. Before warming up, meditating, or even performing the traditional group bow, Jack stood in front of the class and broke into an out-and-out rage. His pink face turned bright red, blue veins popping out on his shiny, sweating forehead.

“We are not here to learn ‘martial arts.’ We are here to learn how to fuck people up!” he said. “We’re here to teach every goddamned puny-ass bastard who ever looked at us sideways a lesson they will never forget. Let them eat cake now. Four months into your training with me, they will be eating their own goddamned teeth. Mothergoddamnfuckers.” He smacked the sand-filled punching bag so hard it folded—a nearly impossible force. “That’s their fucking face!” He pointed to the swinging bag. His eyes trembled as he yelled, and when he was not yelling, he was eyeing the students for support.

A few young men in the class were riled up, their adrenaline rushing to their fists. They roared in agreement. Other students looked around at each other, confused. I, myself, was scared. I looked for the nearest exit sign, wondering if anyone had run a background check on Jack Blakely. After fifteen minutes of this trash talking, Jack shut up and paced the front of the room like a leopard in a cage, his eyes crazy-fierce, the wall-to-wall dōjō mirrors behind him reflecting his eerie image. He no longer looked like the Gerber baby. Finally, he took a deep breath and calmly, methodically, pointed at certain people. “Randy!” he said.

Randy was one of the young men who had been excited by Jack’s speech, agreeing with every word. Randy leapt to his feet and ran, front and center. He stood at attention.

Jack walked toward Randy and put his nose on Randy’s nose, the stereotype of a drill sergeant. He bared his teeth and whispered, “Get out.”

Randy’s eyebrows shot up like a puppy dog’s. His jaw dropped. “Huh?”

“Get out of this dōjō now, “ Jack said. He enunciated the words. “I’ll give you your money back. Just get the hell out. Now!” Randy, confused, waiting for the joke that never came, eventually left the dōjō.

Jack pointed to another student and another, until nearly a half-dozen young men were asked to leave. By contrast, anyone who had not shown the least bit of interest in Jack’s violent outburst was allowed to stay. He explained to the remaining students, calmly, in the voice of a wise old man, “I can’t teach people who seek violence. I will not.” Then he led the class in a fifteen-minute seated meditation.
Posted by Doug Aoki at 08:57