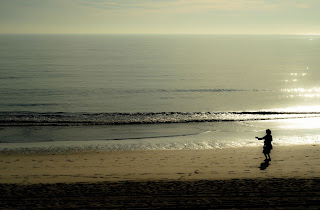 One of the influences on karatedō is Shintō 神道, the native religion of Japan. Shintō is animist; it conceives a spark of divinity in forests, rivers, rocks, and any other element of nature. In that sense, there is something sacred in each person. The same notion is widespread in the West, but its logic works very differently than in karatedō. In this culture, the conclusion is, “I am special” or “God loves me”; the conviction is that each of us is inherently valuable because we are human.

This is not the attitude of our karate. In our dōjō, no one is valued in and of her/himself. No one is special—not the student and not the instructor. The expectation is that each of us should recognize the  divine in every other person, not lay claim to it ourselves. So the orientation is outward, to the world, and not inward, toward the self. This is not to say that the karateka thinks s/he is worthless; it just means that s/he believes that her/his value is not given, but earned. More accurately, the emptiness sought in karatedō means that one’s own value becomes simply irrelevant. Instead, the karateka is judged by what s/he does, not what s/he is. Does s/he make the world better, even in a small way? After all, from the perspective of the planet, all your mere existence does is consume the good things of the earth and give back carbon dioxide, piss, and shit.

You owe the world more than that.

The contrast here is between entitlement and obligation. In the West, a fundamental ethical principle is human rights: the right to life, the right to freedom, the right to vote. Of course, karatedō is not against human rights. But it is opposed to their corruption. People seize upon the freedom of expression to say, “I have a right to my opinion,” believing that their prejudice, ignorance, and irrationality deserves the same respect as someone’s right to vote in a democracy. Karatedō holds that this is very bad. First, because most people really need to work on being quiet and listening and thinking. More importantly, that kind of self-entitlement is anathema, and deserving of the kind of material correction that a well-trained karateka can deliver. Lastly, most of what most people say does not make the world better. It’s just unpleasant noise. Silence would be so much better. That’s probably the best lesson of Facebook.

In particular, silence would be much better than the noise of entitlement and self-praise. I realize that there are not a few who think it would be much better that I stay silent than keep babbling on this blog, and they may be right. Yet writing is also one of the ways of art that are mandatory complements to physical training in traditional budō, and I have an obligation to teach, regardless of the ongoing failures in my teaching. In my work in the academy, I regularly encounter professors who say openly, “I’m a good teacher” or speak of their teaching awards. This does not make the world better in any way. I know academics who think they're entitled to be addressed as “Dr” or “Professor” by their students. They see it as a matter of respect and professionalism. But respect is not an entitlement. It can only be given by someone else. For karatedō, the professor should focus on trying to teach her/students better, and, if that works well enough, the respect will come. Or not. Either way, demanding respect never works. Requiring others to call you by a title is just a discursive fantasy, in which students are forced to say tokens of respect they may not feel, and the professor coddles her/his own ego by pretending it’s real.

For a karateka, it is difficult to find the spark of the divine in anyone who talks so much about her/himself and demands that others affirm her/him for doing so.
Posted by Doug Aoki at 10:54