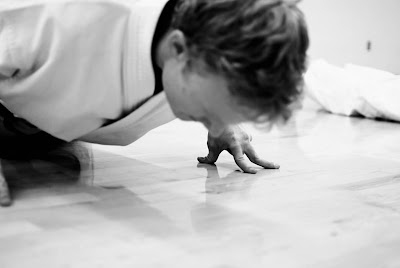 In karatedō, we push ourselves hard. A professor once told me, “I’ve learned over the years to be gentle with myself.” Our attitude is different: be gentle with others, take care of others, but be absolutely merciless with yourself.

This culture loves ease. Products are marketed by assurances they require no effort at all or will take the effort out of living. Karatedō is different. Karatedō holds that living demands effort. There was a karate class training in a small basement room. They worked so hard that their sweat made the air heavy. The humidity condensed on the low ceiling and dripped on them as they kept practicing.

We’re not quite there yet, although our uniforms are sodden thirty minutes into a practice and we leave big puddles of sweat on the floor. But we’re working on it. And work is the key. Karate is supposed to be demanding. You’re supposed to go right up to your physical limits and beyond. Our conviction is that no matter how hard you’ve tried, you could always have done one more kick, one more punch, one more push-up. Giving 100% is a myth.

At some point in your life—perhaps a few days from now or perhaps not for many years—you will be faced with particular choice. It could be that someone you love will be really counting on you to come through or it could just be that you will know, in your heart, the right thing to do. Either way, the price will be very high. It may cost you your money, your friends, your job, or your reputation. Maybe even your life. You will have to decide whether to pay that price or take the easy way out. And if you can’t make yourself do one more push-up when your arms ache, or can’t even get yourself out the door for a workout, what makes you think will be able to do that hard thing when your conscience asks you to?
Posted by Doug Aoki at 09:17 No comments:

The moment you walk into a really good, old-fashioned boxing gym, you’ll catch the ripe smell of honest sweat, a diluted version of the fragrance of the inside of a hockey equipment bag. Entering a good karate dōjō is very different. The Japanese place a high value on cleanliness, which means there should be no residue of the perspiration shed profusely there.

At the end of a karate class, everyone, whether white belt or black belt, young or old, student or instructor, lines up with her/his hands pressing a damp rag against the floor, then runs the length of the dōjō, back and forth, until entire floor has been wiped down. This is called sōji 掃除.

A dōjō becomes a special place only by the respect that the students as a group, or community, have for it. If everyone believes that it is a place to study and perfect the self, then how could it be kept clean by others? It is our place. We are making a shared commitment to it and to our practice. With a shared commitment comes a shared responsibility, including that for keeping the place spotless.

Karatedō aims at making its practitioners less centered on the self and more conscious of the world. My dōjō is fortunate to have a big room in a high school with beautiful hardwood floors, where dance classes are held during the day. Before each of our karate sessions, whoever arrives early dust-mops the floor, cleans the mirrors, and gets down on her/his hands and knees to remove scuff marks to prepare the dōjō; after, we do sōji with the damp rags. Our obligation is to leave the space better than we found it, especially because we share the room. Our aspiration is to make the world a little better because we were there.

Like everything in karatedō, the key is repetition: doing sōji every time we train instills a habit, in exactly the same way practicing a technique over and over makes it feel like a natural part of who we are. For us, sōji is much akin to mokusō 黙想, the silent meditation that we do to open and close a class. Cleaning the dōjō is a way to cleanse the heart and soul, just as mokusō is a way to empty the self. Sōji is particularly important in this culture, where cleaning workers like janitors or chambermaids are too often denigrated as low-class labour. In the dōjō, it doesn’t matter if you’re a doctor, lawyer, or executive; it doesn’t matter how much money or education you have. Everyone gets down on the floor and cleans alongside everyone else.

C W Nicol said of his karate training in Japan:

After each class the students closest to the door would rush out to get buckets of water and cloths. As many as could grabbed a cloth, dampened it in the water and placed it on the floor. Both hands were placed on the cloth, and with his buttocks high and his body almost in a “push-up” position, the washer ran the width of the dojo, cleaning a foot-wide swath. We raced each other across the dojo in this way, thus strengthening hips, legs and arms, and sometimes crashing into each other, laughing and panting.


This task was never omitted, and nobody was ever ordered or asked to do it. A few, especially Westerners, dodged it, but the teachers and sempai always knew, and although they said nothing, the result of their observations would come out in the quality of individual instruction. Slackers, dodgers, and those with poor spirit were ignored on the dojo floor.

I am less subtle. I expect everyone to do sōji and say so directly. But some of the most fun I’ve had in karate has been running across the floor with my students, desperately trying to catch up to those young legs. There are few things better for cleansing me of my pride than having my 16 year-old son easily outrun me. Of course, that makes me proud, too, but I allow myself that. A strong son in a clean dōjō is a very good thing.
Posted by Doug Aoki at 09:35 No comments:

A student is deluded when he enters martial arts with high hopes. The first thing a competent teacher will do is dash all those hopes and aspirations to the ground. If the student can’t survive a slightly injured ego, there is no way he can survive the training to come.

Furuya Kenshō
In our dōjō, we strive to be supportive of students' strenuous and very sweaty efforts to learn. I am very aware of my obligation to teach to the best of my abilities, regardless of how limited they are. But we also defy the conventions of teaching outside of the dōjō, because we are not in the least concerned with making students feel good about themselves or building self-esteem. In fact, karatedō is dedicated to the very opposite: killing the ego through emptying the self.
This is difficult.
Difficulty has been praised in philosophical circles for at least decades, but the budō take the necessity of difficulty in a particularly serious way. If you are finding karate easy, then you are not doing karate. The difficulty is not just technical or corporeal, although it’s that as well; it goes far beyond how truly hard it is to master either a very advanced technique or the most basic of fundamentals. It’s the difficulty of overcoming one’s own ego, one’s own self, how that deeply personal difficulty is fused to the inevitable hardship of training. 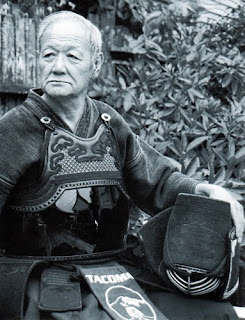 Rod Nobuto Omoto
On and off the university campus, knowledge tends to be an unquestioned good, unless you believe in creationism or vote for Stephen Harper. The budō also value knowledge—but they see it as just a first step, as Rod Nobuto Omoto, who teaches kendō, the way of the sword, explains:

There are three types of people who practice kendō. One is the curious type. They come in and they quit, because they know the thing already. They learn men, kote, dō, tsuki, the targets of the body and how to attack them. “That’s it? Oh, I can do that.” Knowledge. They stop at knowledge. But if they keep on pounding that knowledge, it becomes an art. “Aha, now it’s an art.” Some people quit there. They know the form and the art. But some people will keep on going, keep on pounding and pounding. And then…kū—it just disappears. You can’t quit, because it becomes you.

Kū 空 is emptiness or the void. It can also be pronounced as kara, the first character of 空手道 karatedō, the emptiness regularly mistaken as referring to no more than fighting without weapons. The real kara, which is not specific to karatedō but crucial to all budō, is exactly what Omoto Sensei describes. One is obligated to gain knowledge (and to teach it), but one is also obligated not to stop there, to keep working that knowledge—to keep training—until it disappears. Training, in budō, takes up where teaching (of knowledge) leaves off. This is where Omoto Sensei’s deceptively simple formulation turns sublime, because two things happen when knowledge, pounded into art, is pounded sufficiently further in training: knowledge disappears and knowledge becomes who you are, because who you are is pounded away in the project of annihilating the self. Karatedō is the practice of one kind of emptiness on top of another, a commitment that you can’t quit because the ego has been killed.
Posted by Doug Aoki at 09:22 No comments: 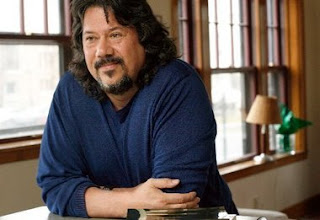 Richard Katrovas
A lot has been made in recent years about bunkai 分解, the analysis of kata for fighting applications. Even Funakoshi Gichin 船越義 warned of the danger of kata degrading into dance if it lacked consciousness of its original martial aspect. Still, the nature of what is being fought in kata is nuanced. Richard Katrovas elegantly articulated the view of our dōjō:

The kata, I realized only years later, after I’d taught karate for part of my meager living for several years, have little to do with preparing one for combat with other men. They are about the inner battle, the need to express dignity in a world bent on wrestling it away.

Email ThisBlogThis!Share to TwitterShare to FacebookShare to Pinterest
Newer Posts Home
Subscribe to: Posts (Atom)
© Douglas Sadao Aoki and Bansetsu-an, 2013-2019. Unauthorized use and/or duplication of this material without express and written permission from this site’s author and/or owner is strictly prohibited. Excerpts and links may be used, provided that full and clear credit is given to Douglas Sadao Aoki and Bansetsu-an with appropriate and specific direction to the original content.